Healthcare Leadership In The NHS And Independent Sector

Sir Robert Naylor is one of the most highly respected leaders in the NHS and has been a chief executive for over 30 years, most recently of University College London Hospitals (UCLH).

At a time of profound transformation across the entire healthcare sector, with new models of care emerging and ever greater budgetary pressures and public scrutiny to contend with, the central importance of leadership is becoming widely recognised as essential to improved efficiency.

The Kings Fund, in its 2011 Report The Future of Leadership was unequivocal when it said ‘The bottom line is that an organisation as large and complex as the NHS cannot be run without high quality leadership.’

This is a view Sir Robert echoes: ‘I joined the NHS as a graduate trainee in 1972 and the pressures faced today are far greater than when I took up chief executive roles in the 1980’s.’

Sir Robert has in fact carried on a family tradition as his father was a hospital leader. His record in the NHS speaks for itself. He spent 15 years as chief executive of the Heart of England NHS Trust before moving to UCLH in 2000, where his achievements include overseeing construction of the new University College Hospital over several phases.

‘When I joined UCLH it was expected to be for five years to oversee phase 1 of the construction. Now some 15 years later we are at the fifth phase, having created a university/hospital campus of which we can be truly proud aligned with a world class university in UCL,’ he says.

This includes the establishment of UCL Partners, an academic health science partnership and the development of the hospital as the ‘hub’ for specialist cancer centre enabling patients in North London, Hertfordshire and Essex access to the very best treatment.

All in all, it has been a lengthy process but international research from scholars such as Ross Barker of Toronto University demonstrates that longevity is one of the keys to successful leadership.

‘The average tenure of a chief executive within the NHS is some two and a half years which is simply insufficient time to develop the type of relationships across ever widening stakeholder groups to deliver the transformation needed in today’s health economy,’ says Sir Robert.

According to Harvard scholar John Kotter, leadership is different from management and centres on the ability to engage people and groups to work together to achieve a common vision.

Sir Robert, who chaired Health Service Journal’s inquiry into leadership for its 2015 report Future of NHS Leadership, agrees: ‘Leadership is not about command and control. The evolution of the health system requires collaborative leadership. The trend toward accountable care organisations coupled with integration of health and social care and the devolution agenda call for leaders to work across systems of care, public and independent sectors and with providers and commissioners,’

He also stresses the importance of developing leadership which is manageable, attractive and sustainable across the health economy if there is to be good prospects of delivering the vision within the Five Year Forward View.

‘In light of public expectations and also recent scandals, including Mid Staffordshire regulatory oversight, is vital for public confidence. That said, the burden on chief executives must be proportionate. There are seven arms lengths bodies dealing with the health service and if we could ensure that the information needed from Trusts was set out clearly and did not have to be sent more than once this alone would save time and resources,’ he says.

The fact that across CCG’s and trusts there may be as many as 2,000 leadership posts suggests that more efficient organisational structuring would be of great value.

In many hospitals around the world, hospital leaders are also clinicians. Despite calls to replicate this in the UK, it remains something that the NHS has been slow to adopt.

‘It is a truism that culturally whenever we have had clinicians undertake general management leadership roles they are often dubbed by their peers to have gone over to the dark side,’ says Sir Robert.

‘This is both a cultural and commercial issue. Culturally the Royal Colleges must promote the value of leadership as part of the training and curriculum of clinicians. Commercially, to be candid, we have to recognise that clinicians can often face significant reductions in remuneration moving into a chief executive role and designing incentives that overcome this will be vital if we are indeed to create a cohort of clinical leadership.’

The HSJ leadership report called on the NHS Leadership Academy to draw more on best practice from sectors outside the NHS. It also recommended ‘buddying’ leaders with their contemporaries and providing mentoring from experienced leaders. Sir Robert stresses the importance of identifying potential leaders within the NHS and offering a support network to help them develop their potential.

‘I am deeply indebted to the fact that as I progressed in my career I benefitted from a clear system of mentoring and guidance; seasoned leaders helped me develop the skills I needed. That formal network of mentoring has all but disappeared and we are self-evidently poorer for it,’ he says.

Looking ahead, he is confident that the transformation of the health economy will continue in radical ways.

‘I have long been a supporter of placing more trust in leaders and teams at local levels in the health economy rather than concentrating direction too centrally. This is indeed one of the philosophical basis that lead to the creation of foundation trusts more than a decade ago. Today devolution, such as that taking place in Manchester, offers the freedom to tailor patient pathways seamlessly across residential and community based social provision and primary, secondary and tertiary care,’ he says.

‘I have long supported the involvement of the private sector as a partner to the NHS. At UCLH we have manifold relationships with private providers from facility management to the provision of radiology and diagnostics services. I envisage continued and enhanced opportunity as accountable care organisations develop at pace and scale,’ he says.

Whilst recognising the greater complexity it entails, Sir Robert believes that focusing on leadership will bring rewards.

‘It has been a privilege to be the chief executive at UCLH and if we can support and help develop true systems leaders I have confidence we can ensure continued improvement in patient experience and outcomes,’ he says.

Are you a healthcare leader? What do you think are the differences between leadership and management? We would welcome your views and insights, please leave a comment below.

Suhail Mirza Suhail brings a unique level of insight and business experience to the challenging health and health care market. This insight and Alium's ability to source the best people this industry and wider will help enable the many changes needed across this industry. Suhail works with leading healthcare providers across both the NHS and private health market, delivering the right experts and team resources by accessing our comprehensive health talent pool.

The Benefits Of Using An Interim From Outside Your Sector → 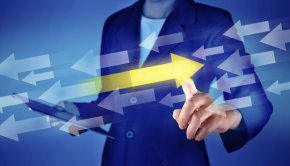 Healthcare: A Time Of Transformation North Of The Border →